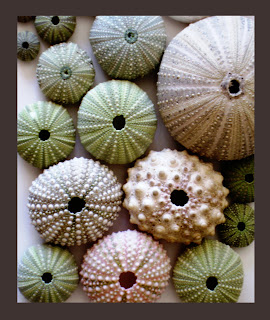 My largest and oldest collection is made up of    all the treasure I have picked up mostly from Kenyan beaches. As kids we used to have beach art competitions for which we would earn chappie money (money for sweets) as prizes.


We would spend endless hours beachcombing under the sun. The joy of finding any member of the urchin family was fantastic – we don’t get nearly as many on the southern coast beaches as more often than not they get smashed up on the reef, it’s always a bonus to find one still perfectly intact. They are incredibly fragile and all too often, I have experienced the disappointment on arriving home only to find shattered remains.

In my third year of studying jewellery design I finally came up with a process to preserve and reinforce the shells so that they can last forever and be used as cabochons in jewellery.

Some interesting facts about sea urchins:


I find these creatures truly beautiful and really enjoy thinking of ways to incorporate them into my art…. Made in Kenya TV

Sign up to get the latest on sales, new releases and more …